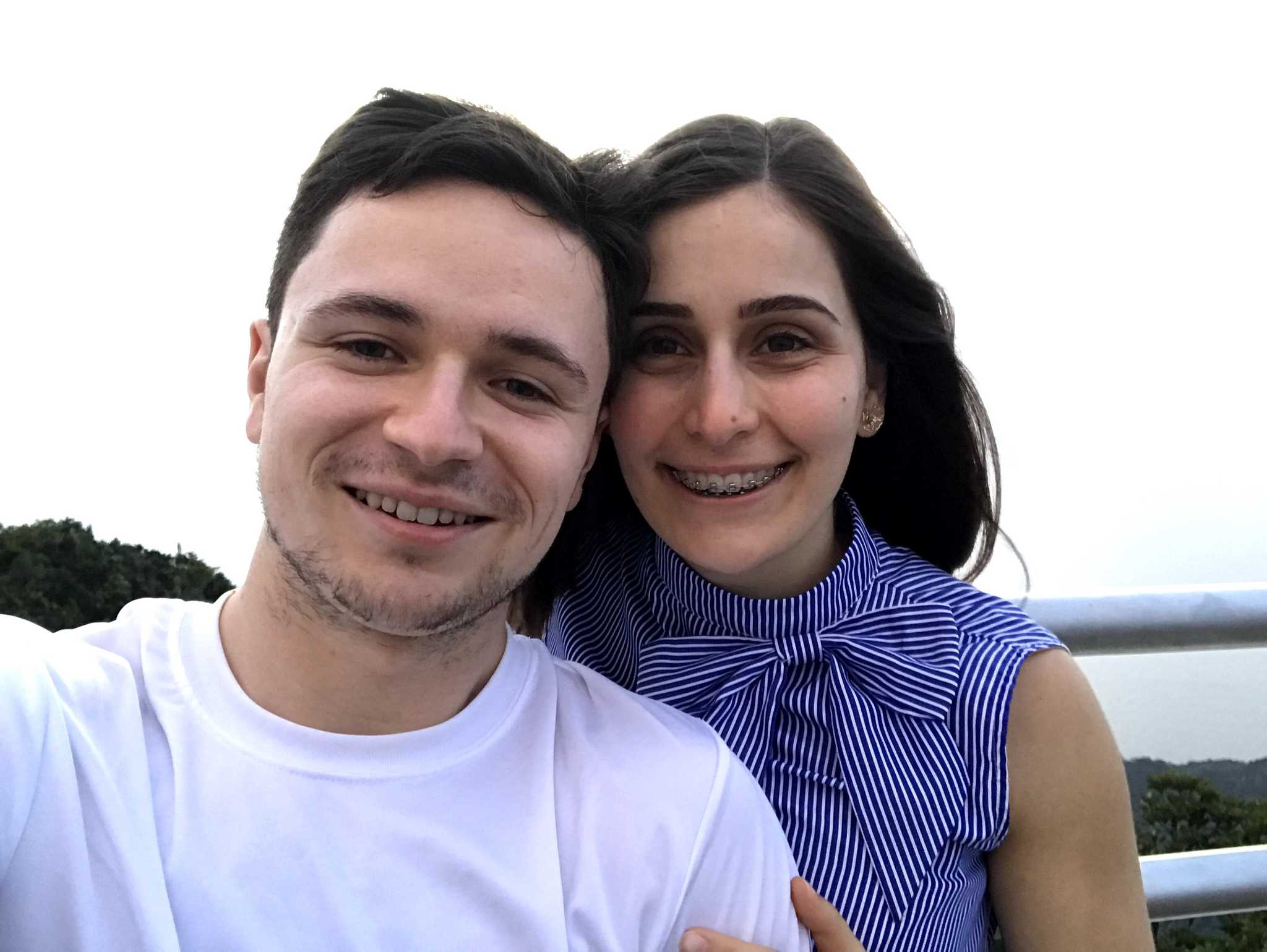 Malaysia will hold a special place in our hearts. It's been about a week of Andrew and I figuring out travel (and life) together. Soon we will meet our friends to explore Thailand and Vietnam. For now, I treasure this time together.

We all know how much my husband loves trains - so naturally we had to incorporate that into our trip! An overnight train took us from Bangkok train station to the boarder of Malaysia. 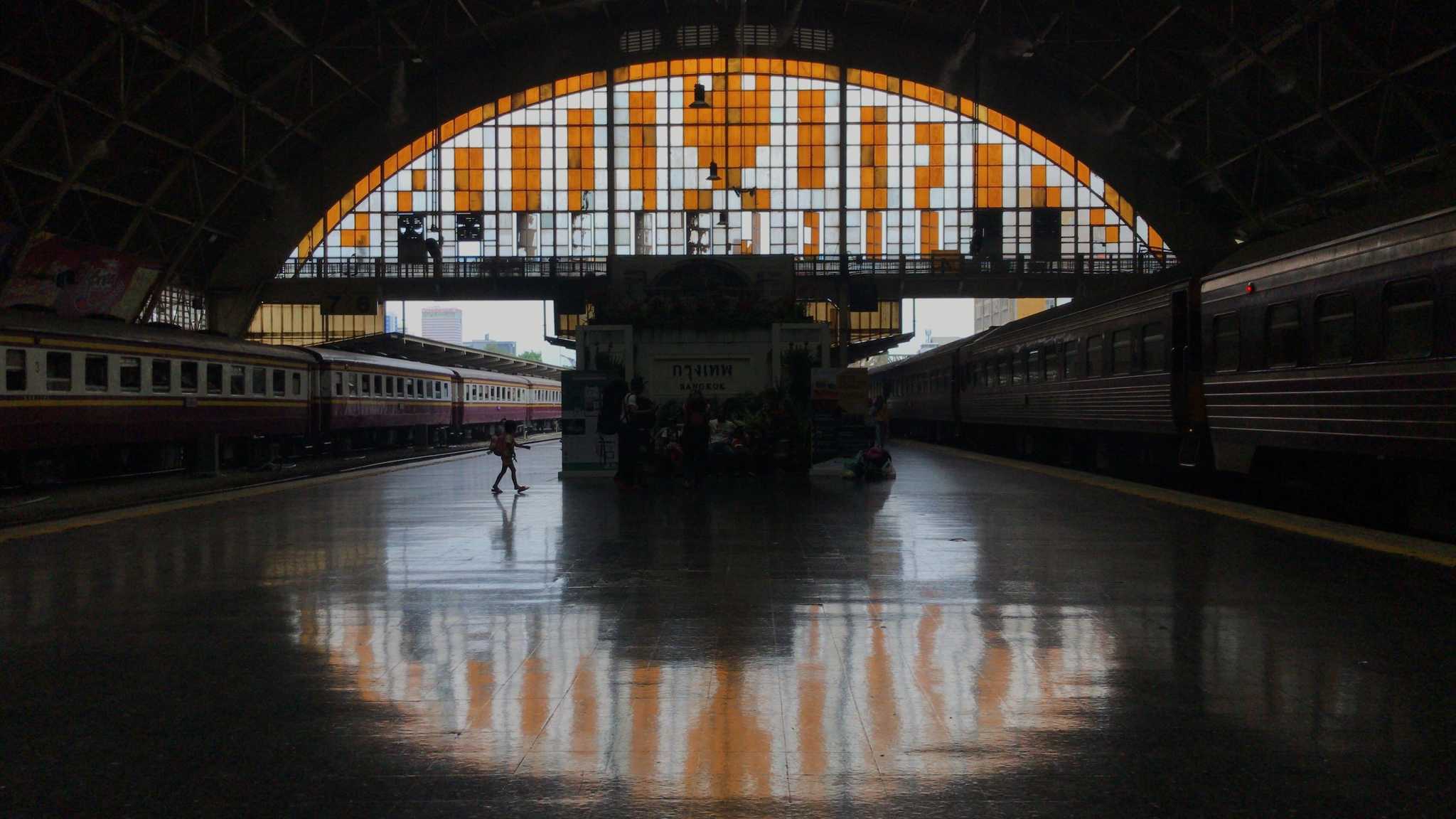 On the train we met an older couple who were retired from the tourism industry and continuing to explore the world. They were both relaxed and enjoying the long trip, ready with all their travel supplies -everything from tissues to wet wipes (to disinfect table surfaces) and travel cups. As evening drew near, the man and woman chatted with us, telling us about their life, asking about ours and sharing all the great places we could see on our trip. The man even helped translated for us, asking the staff to set up the beds. Through a series of precise manoeuvres by the train staff, a bunk bed with a top and bottom bed was made and clean linen set up. I climbed into my top bunk and Andrew into his cross the aisle. 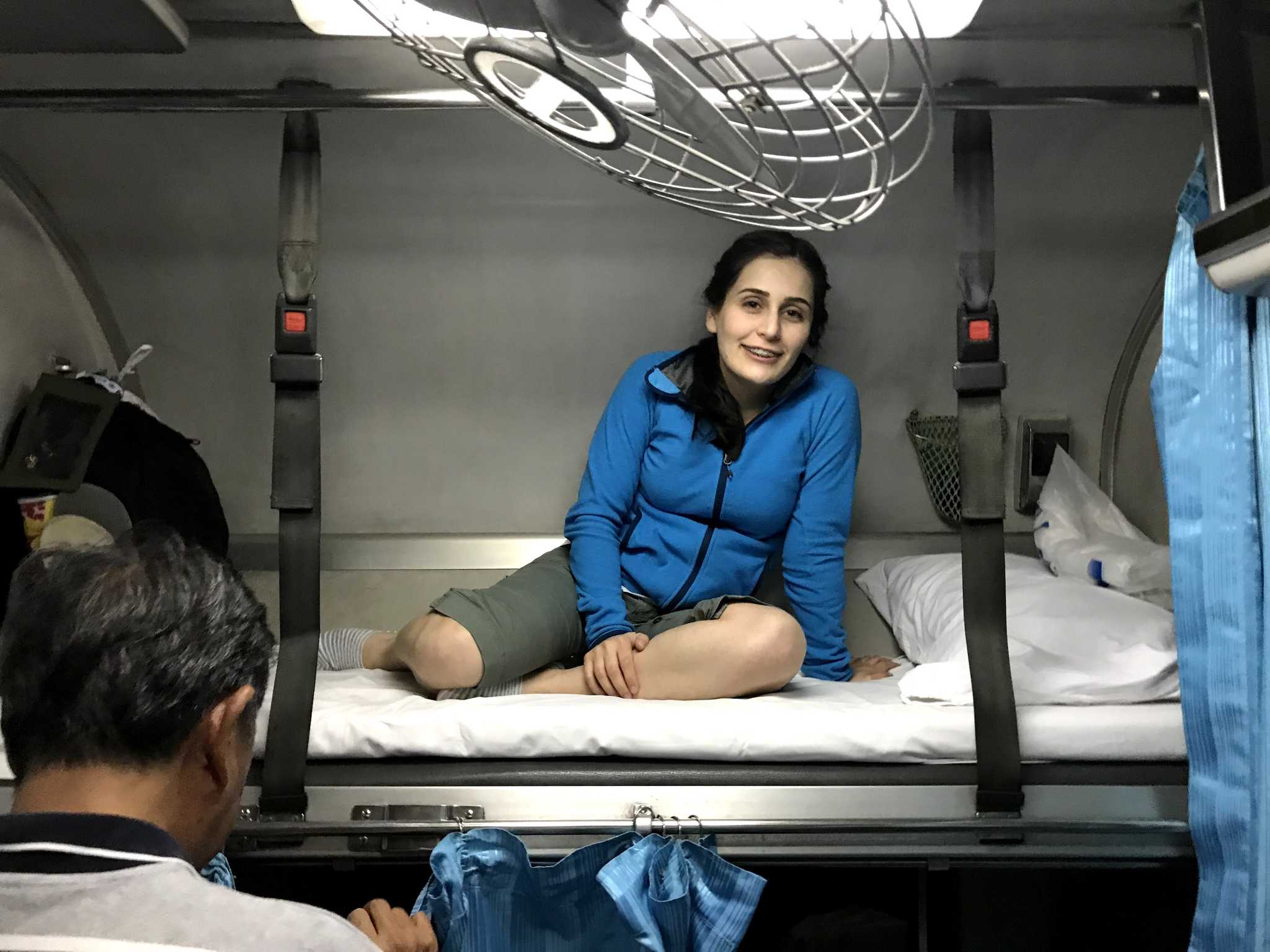 Drawing the curtain closed, I managed to catch some deep sleep for four hours, waking up for three hours, sleeping for one, waking for one and sleeping for another. It was hard to tell when it was morning since the top bunk didn't have a window (only the bottom ones did) - my body was likely confused about the time without the guidance of the sun or perhaps I was still running on EST.

Eventually morning came and the bunks became seats again and we watched the rolling landscape -lush rolling hills between small towns. Soon the train stopped in Haadyai Station, Hat Yai to remove a few cars off the train. The woman across the aisle leaned in and told me this place is famous for their fried chicken. So we had to have this for breakfast! The local sellers brought around baskets of this deliciousness for sale while the train was stopped. The fried chicken was so good and had a brilliant red colour.

After arriving in Pedang Besar, we got off the train and made it through customs. With the help of a local and an international student (studying in Malaysia), we caught a taxi to the ferry terminal and took the ferry to the island of Langkawi -our first stop in Malaysia.

Seashells at the beach, Lankawi

The ferry took us to the south end of the island, a bustling area with a large ferry terminal, shops and holiday seekers. Thankfully we chose a tranquil oasis on the less crowded northhern beach. We arrived to a beautiful property with cottages and a café on site. It had a homey feel with the wind chimes dancing in the wind and a throwback playlist playing in the background at the open air cafe. The café had a mix of Western and local food and drinks -including a tamarind cold drink made from the pods of the hundred year old tree growing in the middle of the cafe. Jeff and his wife, our warm hosts, made us feel right at home at Eagleye. And just steps away was the quiet private beach. 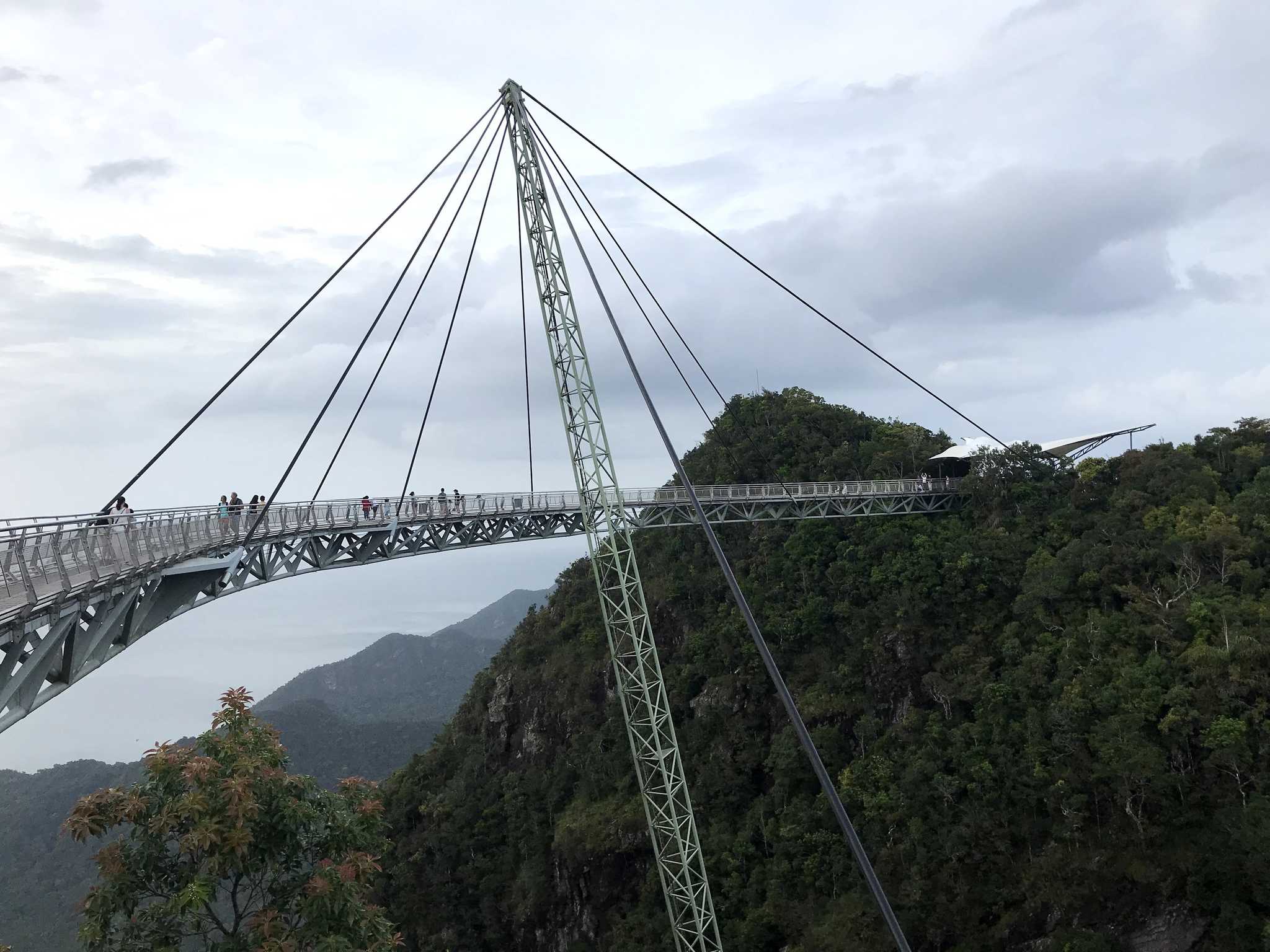 One beautiful early morning we sat on the beach to watch the island go from nearly pitch black to light as the sun rose and revealed the islands in the ocean.

Our first morning we accidently landed in the middle of a food market where Taruc University students were putting their business skills to the test selling food. So naturally we had to have popcorn chicken, rajuk (fruits with a peanut sauce), honeydew pudding and a coconut shake for breakfast. Stuffed, we walking to see local attractions like the Queen Victoria clock tower, Fort Cornwallis, the Church Street Pier, the Church of the Assumption, Chinatown and a lot of Penang's iconic street art. 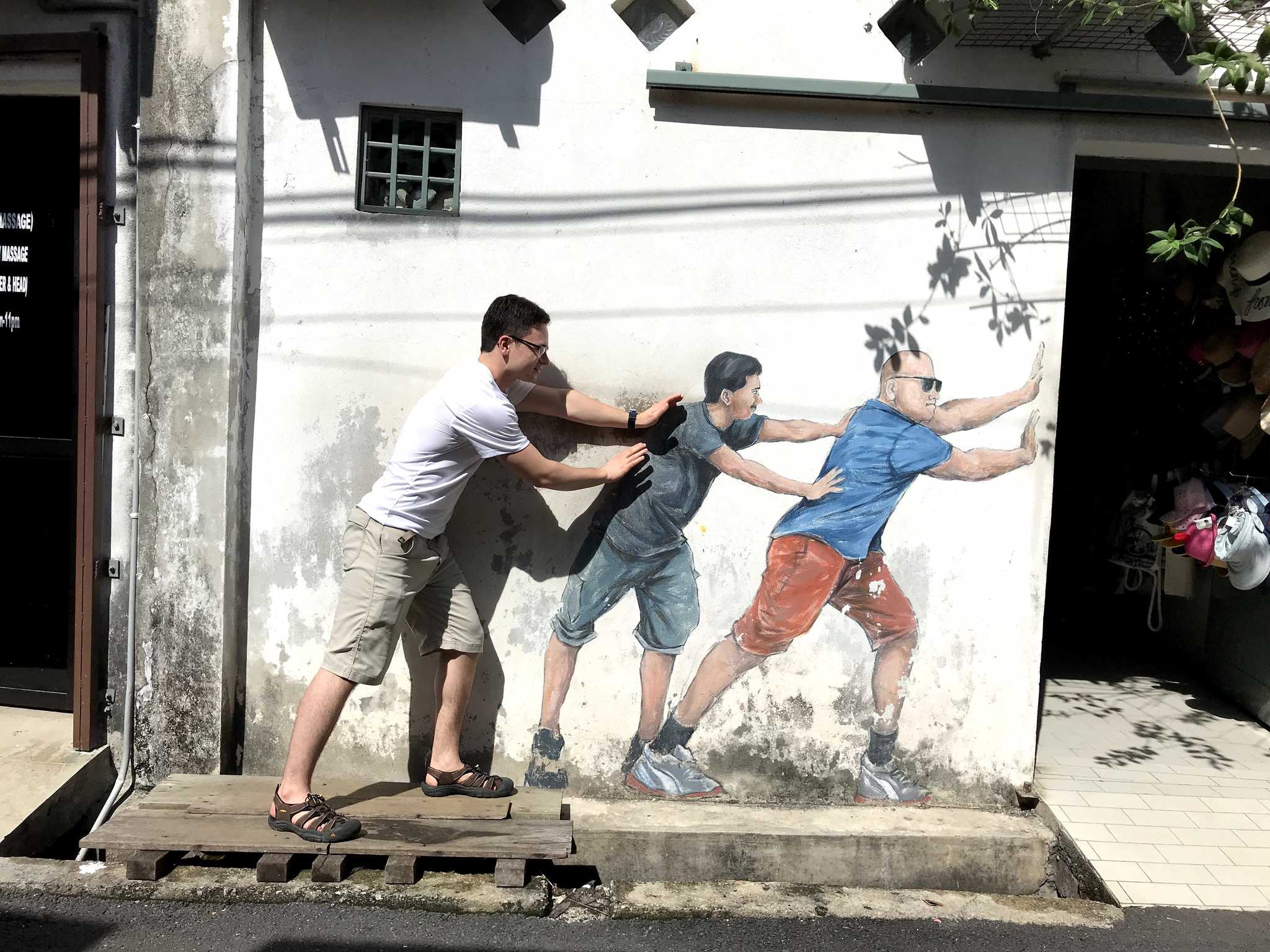 All that walking had us hungry so we popped into 52 Cafe for some char koay teow (my new favourite noodle dish) and fried rice (Andrew's favourite) with an ice cold white coffee. Energized, we saw some more local street art and lots of temples. Old George Town is full of British buildings and is also influenced by Indian, Chinese and Muslim culture. The diversity of religions including Islam, Hinduism and Buddhism was prominent as we passed them situated side by side as far as the eye could see.

Tired from the heat, we stopped in at a traditional boutique hotel for ice cream and a tranquil atmosphere.

Having checked off half the tourist attractions before noon, we checked out of our hotel and into a hostel. Why you might ask?

Well, normally we do airbnb but this time booked a trendy looking hotel room at the Container Hotel for our first night in George Town. After a clogged sink upon arrival and what looked like a bedbug when we woke up in the middle of the night, we were ready to quit this place. It had looked nice in ads but it wasn't. So we checked into a friendly and clean hostel in another part of town. Before sleeping at our new accommodation, we found a self-serve laundry facility where we had all our clothes and bags hot washed and dried, just in case they had bugs from the hotel. This ended up being a really enjoyable hour of doing laundry and a chance to reflect together on life in Canada and what we learned so far on our trip. Funny how things have a way of working out.

Now that we've dealt with that, let's get back to the good stuff! The portions in George Town were tapas style which meant we could eat lots of different dishes and so we had to try a few things at the highly recommended Joo Hooi Cafe. A hybrid between street stalls and a sit down cafe, this place was perfect chaos. We found a seat after a 20 minute wait -there's a good reason this place is so busy. The set up was interesting because we had to flag down the worker from each stall we wanted to order from. Each place specializes in one dish so you know it's good. We placed our order with him (a few people actually because we ordered multiple items from different stalls) and then he disappears. Later he shows up with our dish and we give him cash. This continues until we have all our dishes. We ate and left when we finish, no need to wait for a bill. Our table was quickly snatched by the next eager customers. This was perfect chaos. 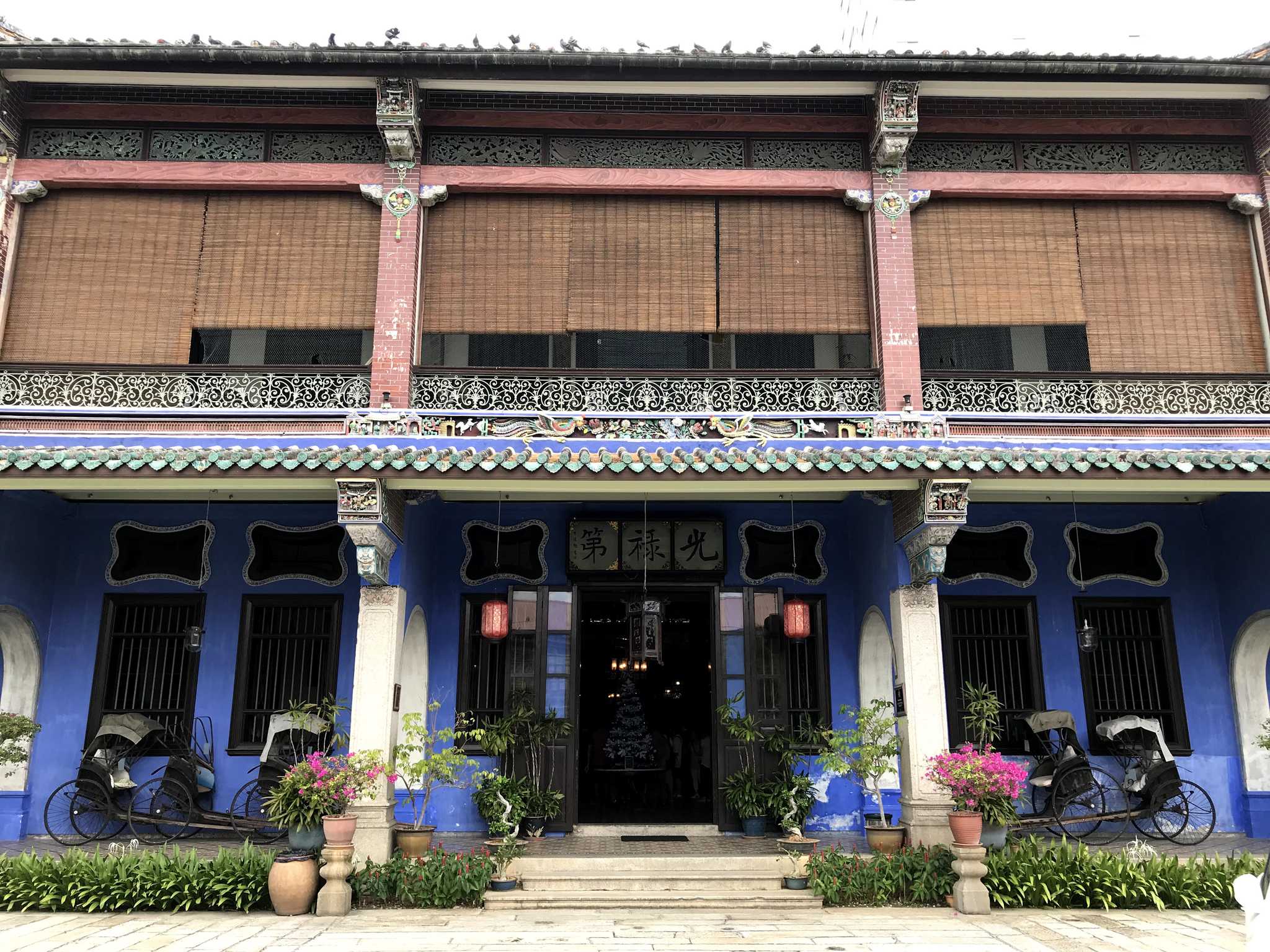 We ended the night in Little India looking at the fabrics and eating some delicious food.

The next morning, we woke up early to see the Clan Jetties along the water. These were transitional elevated homes at the waterfront that would have housed the various clans.

Driving from the airport to Kuala Lampur makes it seem like a lush suburb but we quickly learned this was a bustling metropolis as we headed downtown, more the scale of NYC or the likes. Traffic jams are part of city life as business people, city workers and bankers hustled in the heat.

A short drive away were the Batu Caves which housed a Hindu temple set in the limestone caves. It took about 300 steep steps to get to the top -we saw worshippers including grandmas and a handicapped boy slowly and diligently climb to the top as monkies played at the edge of the stairs and trees. 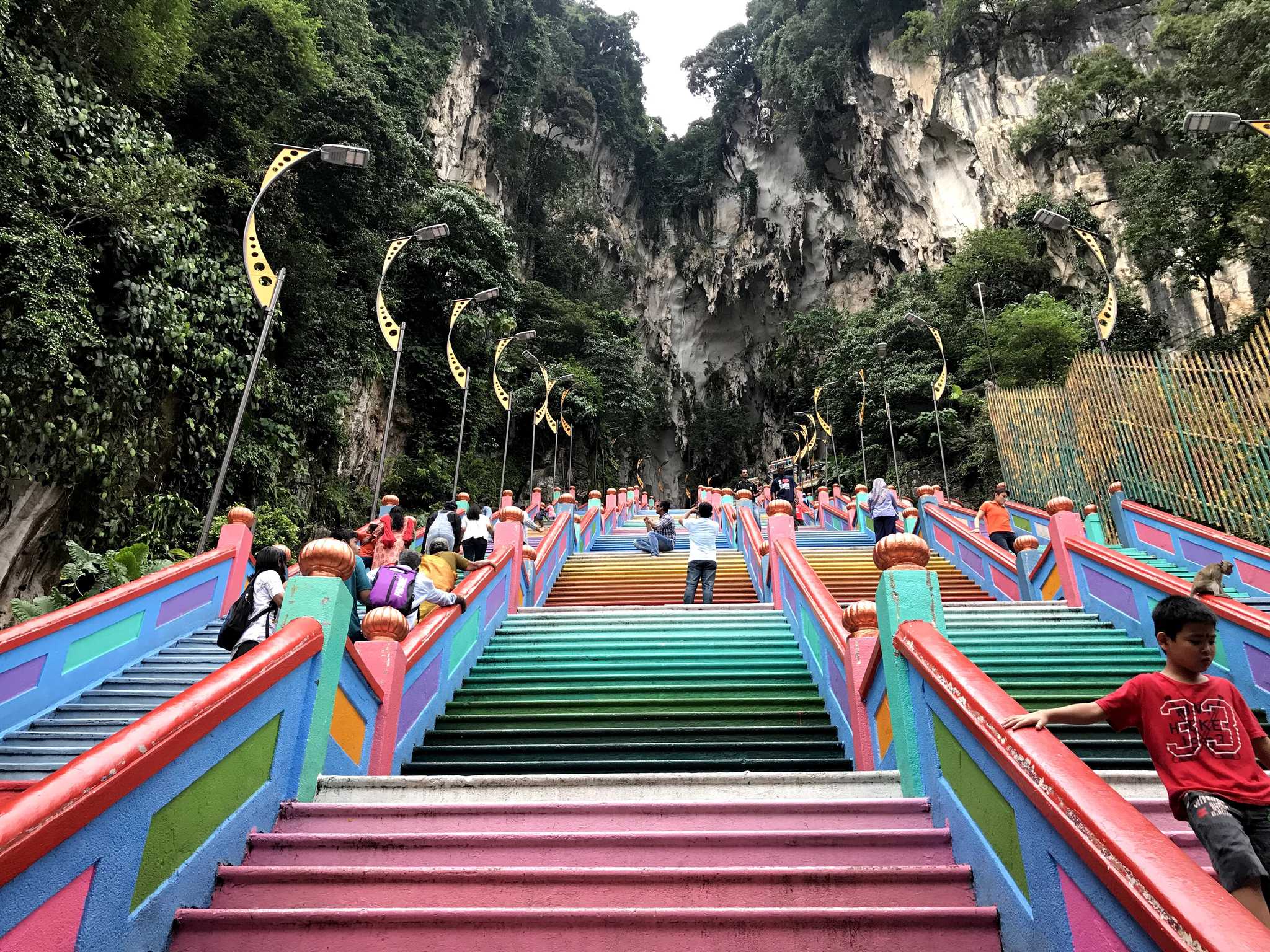 One of our taxi drivers drove down a textile filled alley and told us that KL was once the international hub for rugs and textiles until Malaysia began building mega malls in almost every town. We went to the National Textile Museum to see the various techniques that are used to create the beautiful fabrics of this country. There was also a jewellery and traditional costume museum. 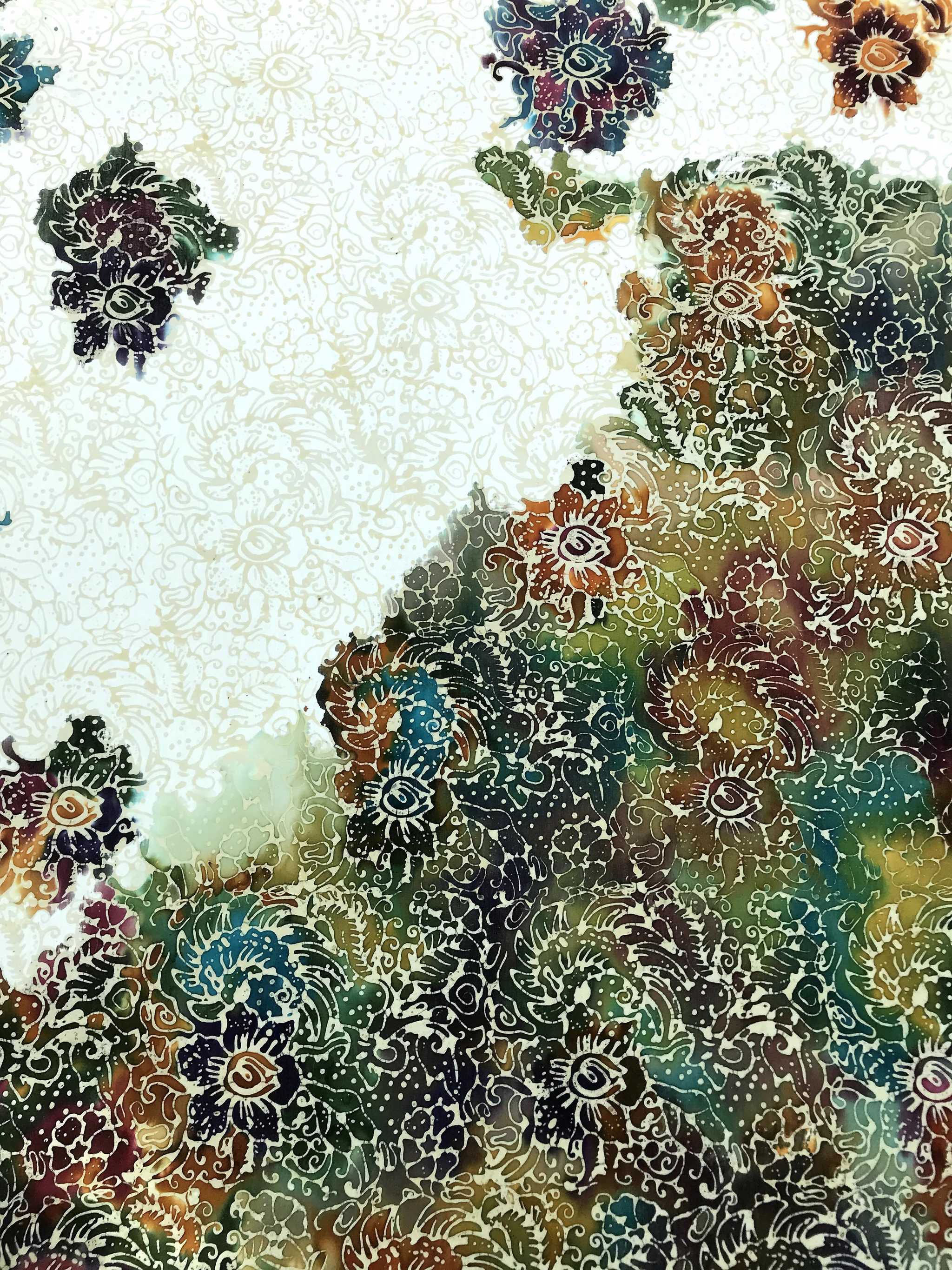 Malacca had been highly rated by by our friends who travelled there. It's definitely a tourist town now (it was named a UNESCO Heritage Site in 2008) but this place has a lot of history. A strategically placed port town, Malacca was largely under Chinese ruling until the colonial influence which arose after the 1500s as the Portuguese then Dutch and then English took control the port. The town finally became part of Malaysia and gained independence in the 1950s. This is all seen by the carefully preserved colonial sites which remain.

Despite being a tourist hub, Malacca has some delicious food for those willing to venture a bit. On our last morning, our hosts in Malacca -Lisa and Carol -took us to a local place for local Malay food and their classic coconut shakes. Budding entrepreneurs and global travellers, it was such a treat to hang out with them and chat. After lunch they drove us to the bus station and saw us off. Thank you, Lisa and Carol. We look forward to seeing you in Canada! 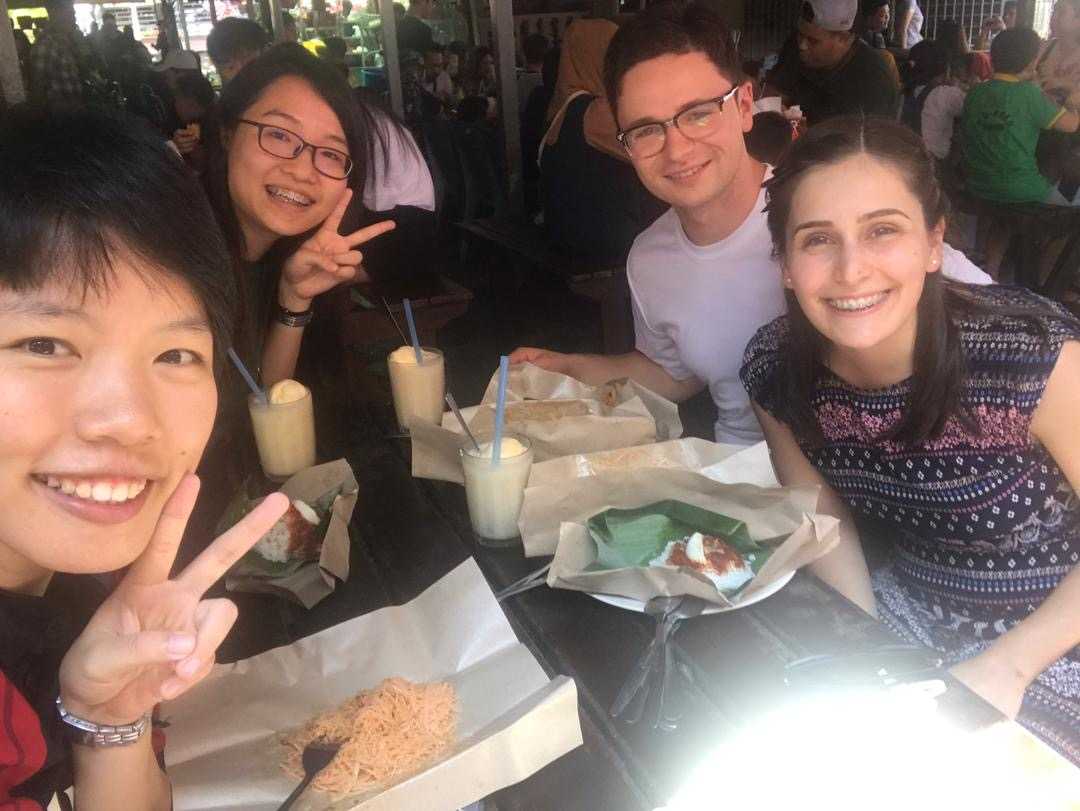 Jahor: An in between place

We stayed in Jahor to break up our travel time getting to Singapore. A delicious Indian dinner at a local spot and good nights sleep.

Until next time, Malaysia. You have been beautiful, stretching, delicious and a memorable place.